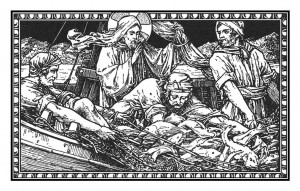 THE Lord is my light and my salvation: whom shall I fear? The Lord is the protector of my life: of whom shall I be afraid? Mine enemies that trouble me have themselves been weakened and have fallen. Ps. ibid. 3. If armies in camp should stand together against me, my heart shall not fear. ℣. Glory be to the Father, and to the Son, and to the Holy Ghost. As it was in the beginning, is now, and ever shall be, world without end. Amen. — The Lord …

GRANT us, we beseech Thee, O Lord, that the world may be regulated in its course by Thy governance for our peace, and that Thy Church may with tranquil devotion rejoice. Through our Lord Jesus Christ, Thy Son, Who liveth and reigneth with Thee in the unity of the Holy Ghost, God, world without end.

BRETHREN: I reckon that the sufferings of this time are not worthy to be compared with the glory to come, that shall be revealed in us. For the expectation of the creature waiteth for the revelation of the sons of God. For the creature was made subject to vanity, not willingly, but by reason of him that made it subject in hope; because the creature also itself shall be delivered from the servitude of corruption, into the liberty of the glory of the children of God. For we know that every creature groaneth, and travaileth in pain, even till now; and not only it, but ourselves also, who have the first fruits of the Spirit, even we ourselves groan within ourselves, waiting for the adoption of the sons of God, the redemption of our body; in Christ Jesus our Lord.

FORGIVE us our sins, O Lord, lest the Gentiles should at any time say: Where is their God? Help us, O God, our Savior; and for the honor of Thy Name, O Lord, deliver us. Alleluia, alleluia. (Ps. 9. 5, 10.) O God, who sittest upon the throne, and judgest justice, be Thou the refuge of the poor in tribulation. Alleluia

GOSPEL Continuation of the holy Gospel according to St. Luke, 5. 1-11.

AT THAT TIME, when the multitude pressed upon Jesus to hear the word of God, He stood by the lake of Genesareth. And He saw two ships standing by the lake; but the fishermen were gone out of them, and were washing their nets; and going up into one of the ships that was Simon’s, he desired him to draw back a little from the land: and sitting He taught the multitudes out of the ship. Now when He had ceased to speak, he said to Simon: Launch out into the deep, and let down your nets for a draught. And Simon, answering, said to Him: Master, we have labored all the night, and have taken nothing, but at Thy word I will let down the net. And when they had done this, they enclosed a very great multitude of fishes; and their net broke: and they beckoned to their partners that were in the other ship, that they should come and help them; and they came, and filled both the ships, so that they were almost sinking. Which when Simon Peter saw, he fell down at Jesus’ knees, saying: Depart from me, for I am a sinful man, O Lord. For he was wholly astonished, and all that were with him, at the draught of fishes which they had taken: and so were also James and John the sons of Zebedee, who were Simon’s partners. And Jesus saith to Simon: Fear not, from henceforth thou shalt catch men. And having brought their ships to land, leaving all things, they followed him.

ENLIGHTEN mine eyes, that I never sleep in death; lest at any time mine enemy say: I have prevailed against him.

ACCEPT our oblations, we beseech Thee, O Lord, and be appeased by them: and mercifully compel even our rebel wills to turn to Thee. Through our Lord …

THE Lord is my firmament, and my refuge, and my deliverer, my God is my helper.

MAY the mysteries which we have received, we beseech Thee, O Lord, purify us, and fulfill their purpose by defending us. Through our Lord …